Our good friend and buddy Peter Anagnos celebrated his 90th birthday on the fourth of September, 2019. His daughter Sharon organized a surprise party for her father on September 5. Four of us, members of HVBS (check the web page link for the story of the group) including Associate Member Shirley, were invited to the shindig. Unfortunately founding member Ron Vogt, long-time friend, was unable to attend due to illness.Member Bill Lucarelli drove our group to the Athena restaurant. 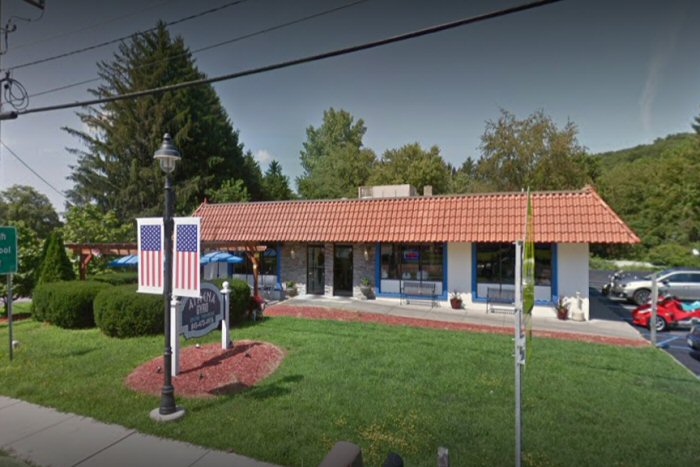 Our destination for the surprise party - the Athena Gyro Taverna in Lagrangeville NY. Bill Lucarelli's auto GPS guided us flawlessly to the restaurant and we arrived before the honored guest. The 'Birthday Boy' himself. Peter and son Dan arriving at the surprise party. When apprised why the crowd was in the restaurant, Peter remarked 'I thought there would be more!' Son Dan in the left background. Peter is conversing with long-time friend Shirley. Peter with his "90" birthday cake. There was a light moment when he displayed the cake in reverse with the numbers looking like "06". All went well as he cut slices for all attending - most going home in the supplied containers after the assorted honeyed dessert items and generous food portions. Daughter Sharon with Peter's granddaughters Casey and Kristi at the head table. View of Peter's close friends with the Athena's regular customers on the periphery of the room. Everyone had a marvelous time and Sharon's 'Surprise Birthday Party' for her father was a great success.