Ronald Ludwig Vogt - good friend and brother-in-law, sister Shirley's husband of 62 years, left this 'vale of tears' and joys on Monday March 9 at 2 PM in the afternoon. A family-only funeral was held at the Glenville Funeral Home. On a ledge on one side of the room was arrayed a selection of photos from his life. He was enthusiatic about the flights that he and I accompanied son Randy for brunch at airports ranging from Burlington VT to Nantucket MA. In browsing through these pages you will see many photos from these flights. A favorite vacation was a trip to the Peaks of Otter in the Blue Ridge Mountains of Virginia. So here is a retrospective of the photos displayed: 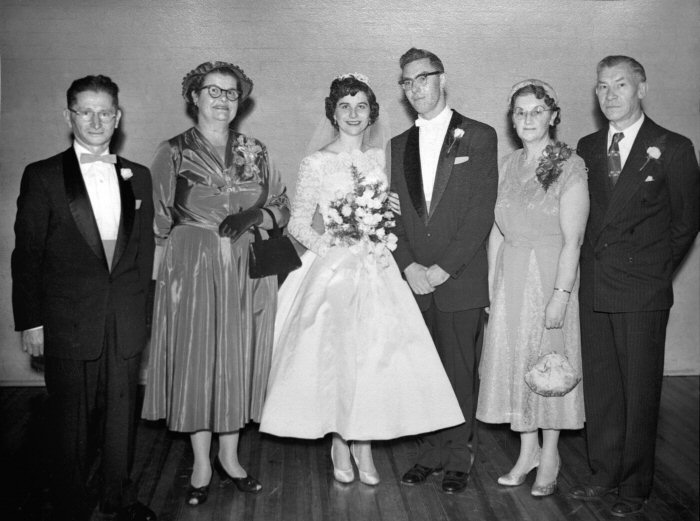 The story starts with Ron and Shirley's wedding at Zion Lutheran Church. On the left are the proud Alex and Frieda, on the right are Ron's parents Ludwig and Helene Vogt. 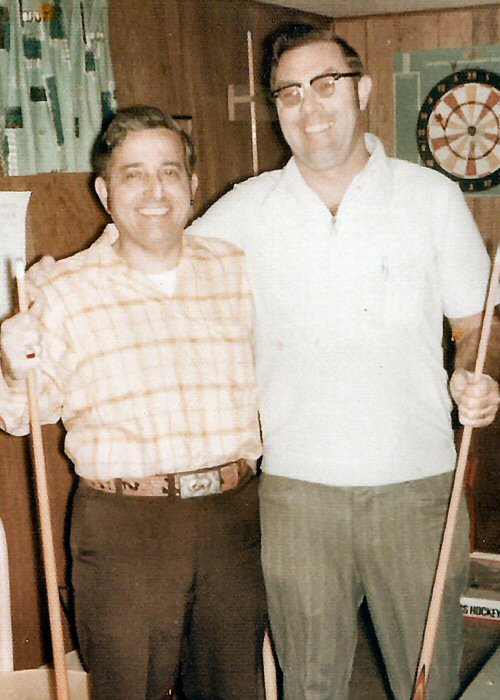 The two friends early in their acquaintance. Ron is visiting Peter at his house in Poughkeepsie. 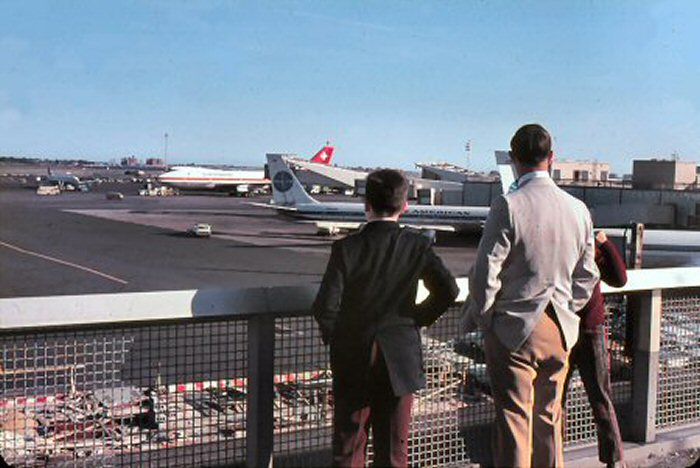 Ron with Russell and Randy watching the action at Tampa International Airport. 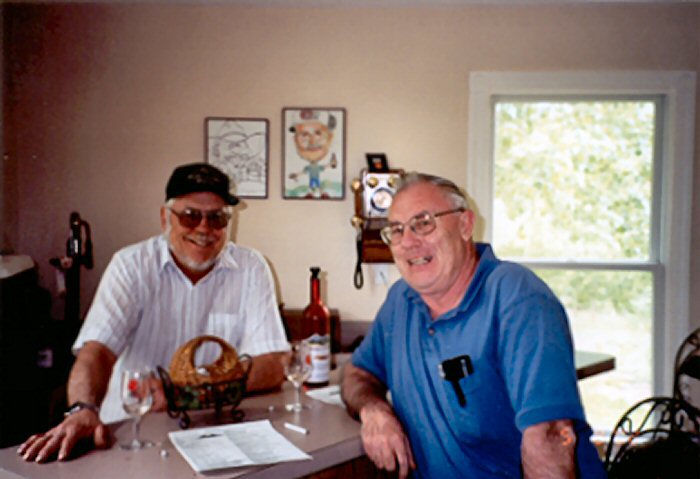 Ron with Mr. Johnson, owner of the Peaks of Otter winery in Bedford Virginia. He specializes in wines made from fruit juices. www.peaksofotterwinery.com 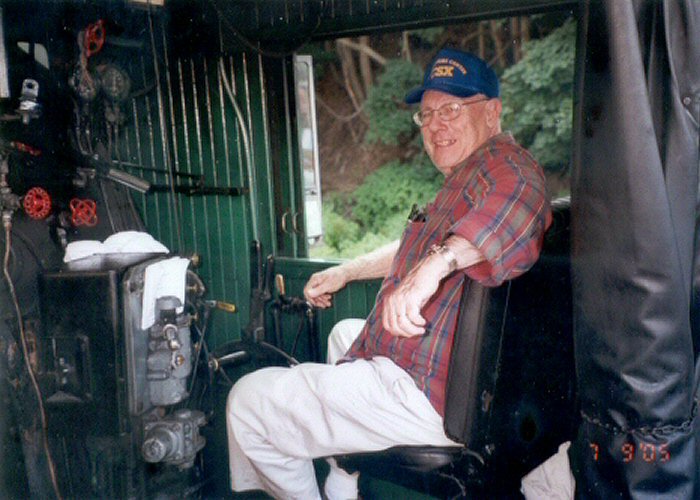 While visiting Cumberland MD Ron and I signed up for a cab ride to Frostburg. He talked me into an extra $75 (each) for us to ride in the locomotive cab. The picture was taken while the engine was on the turntable in Frostburg. 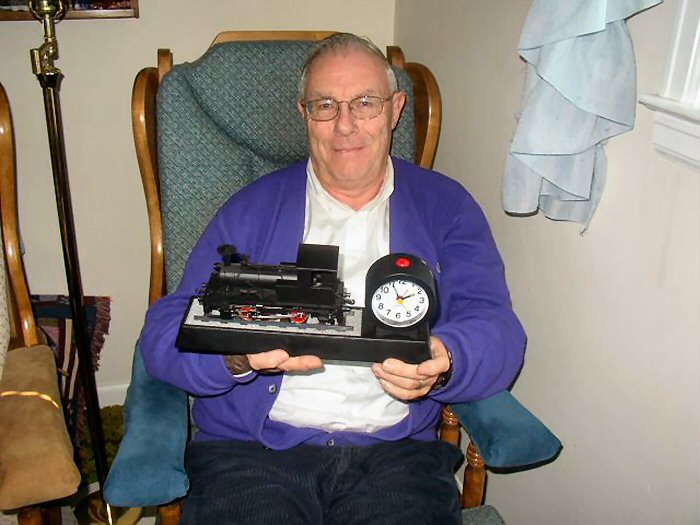 A present for Ron - anything rail oriented was very welcome. 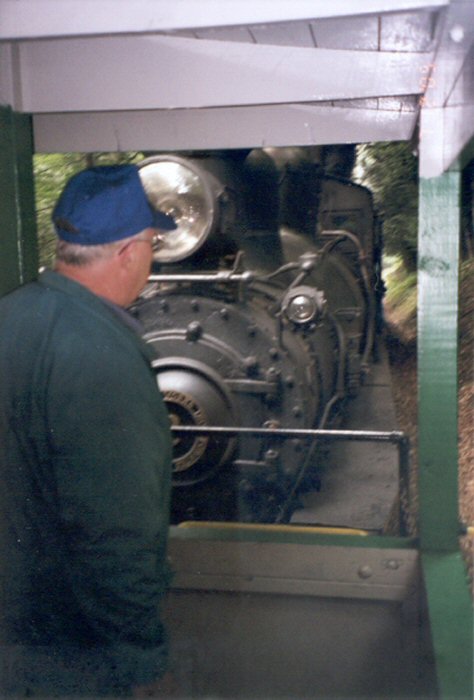 This is really "getting close up and personal" with a geared locomotive at the Cass Scenic Railroad in West Virginia. (Check the second page of the "Rail Adventures 2005" home link. 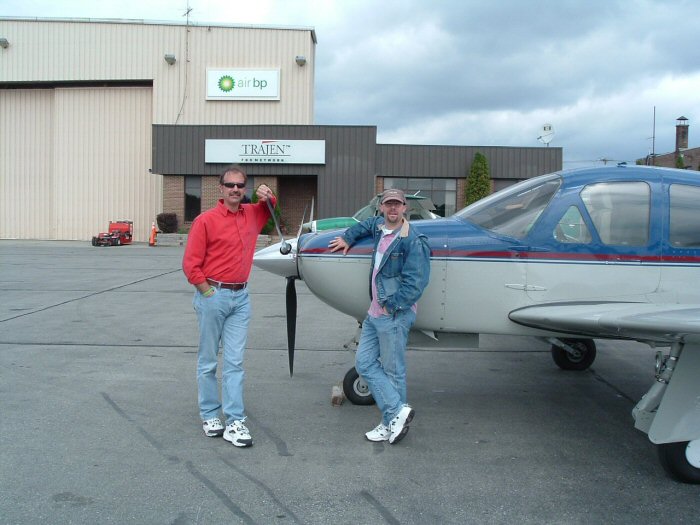 Randy and Don partnered in the ownership of this speedy Commander. 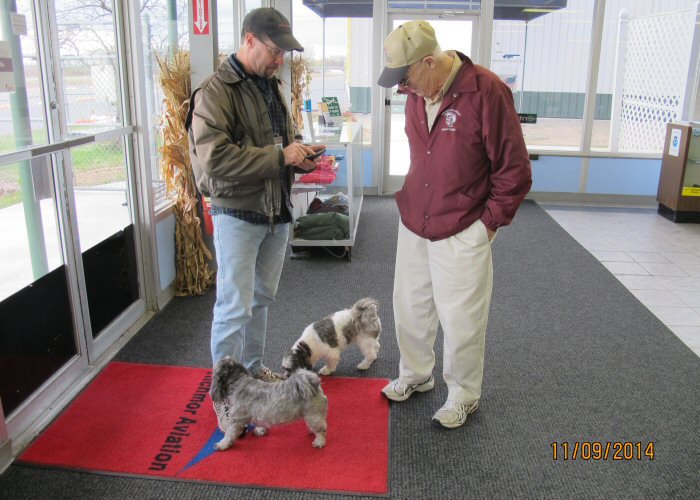 Unexpected welcome from the owner's frisky puppies at Richmor Aviation in Schenectady where Randy kept the airplane he co-owned. 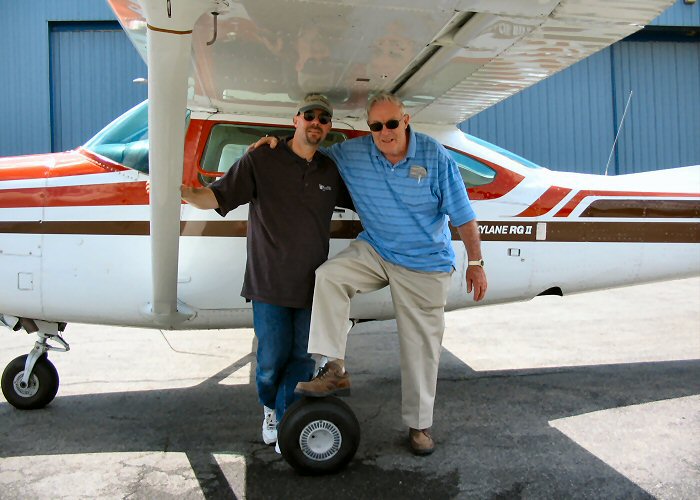 Ron and Randy under the wing of one of the Cessna's owned by the Albany flying club, of which Randy is a member. 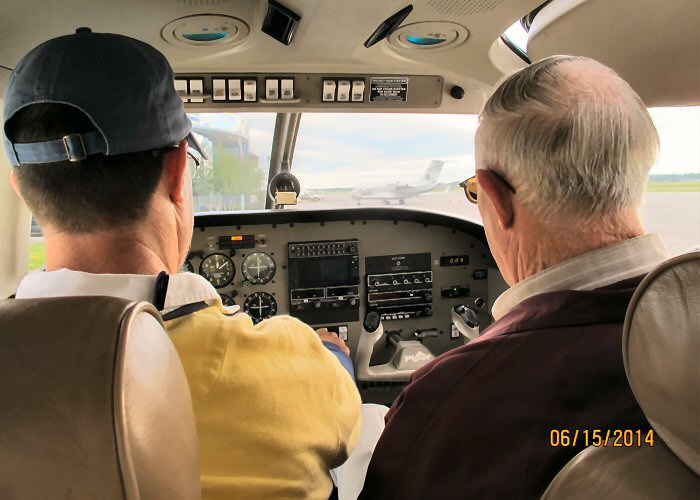 The view from the rear seat (my position) of the Cessna cockpit on the ground at Albany Airport before a flight. We flew to regional airports for "brunch" - really breakfast at the airport's restaurants. 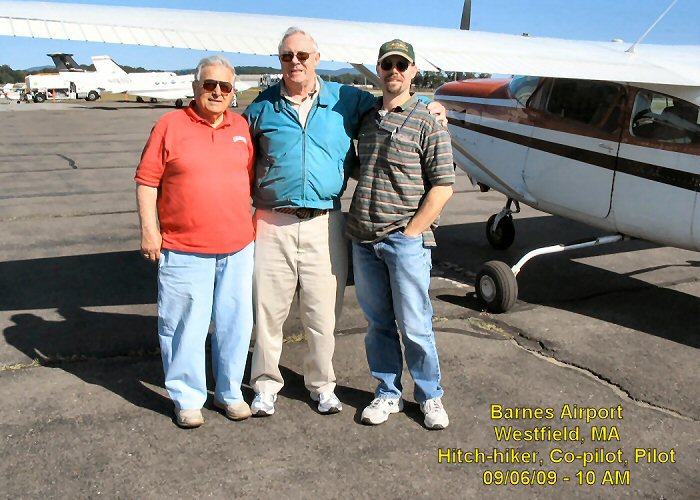 A flight to Westfield MA Barnes Airport for "brunch" with 'hitchhiker' Peter. The restaurant is no longer in operation. 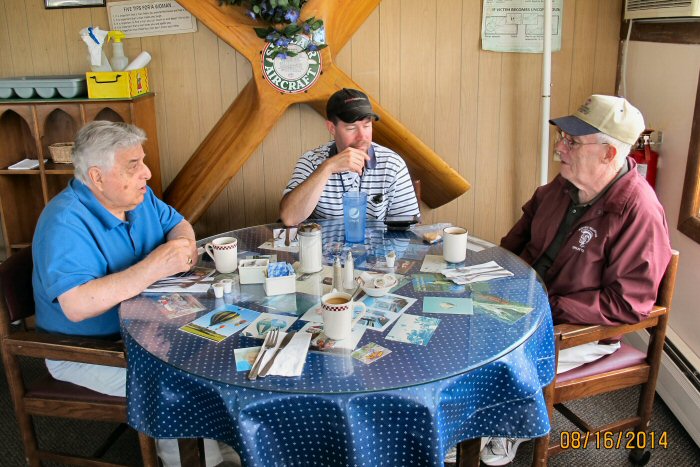 In the restaurant at Sky Acres airport in Poughkeepsie with Peter, Ron and Randy. August 2014. 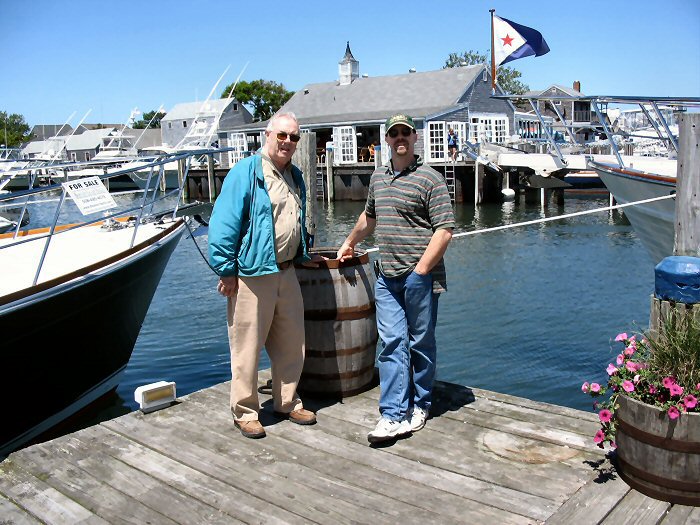 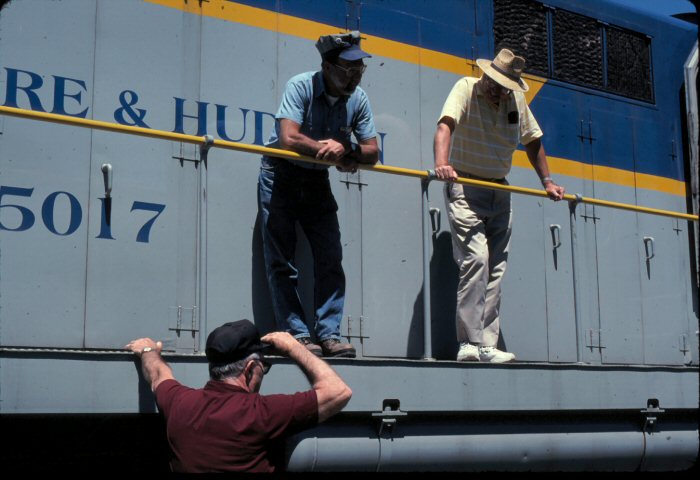 On a fan trip to the Delaware and Ulster Railroad, July 1997. 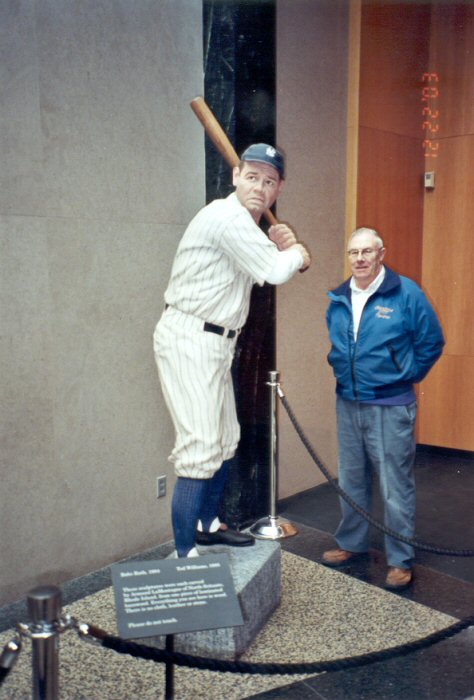 On a visit to the Cooperstown Baseball Hall of Fame with a statue of "The Bambino" Babe Ruth in 2003. 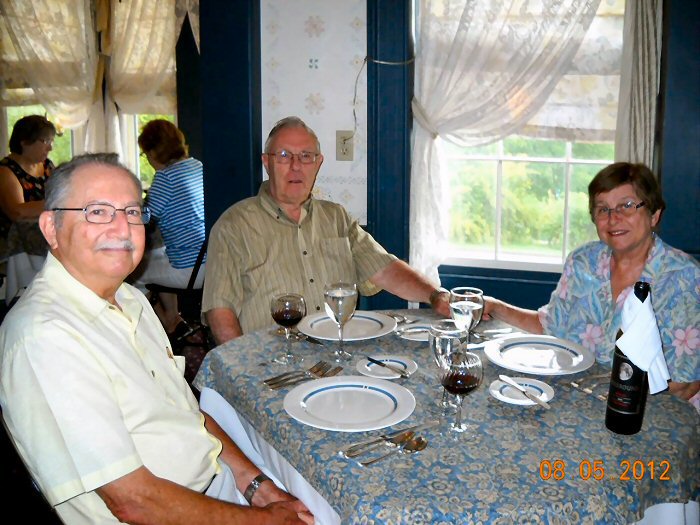 Our favorite restaurant - the Tory Tavern in Schoharie. The 'price fixe' selection was the 'way to go' - appetizer, entre and dessert with coffees. Excellent food, good presentation and marvelous atmosphere in the old tavern. The staff was outstanding. 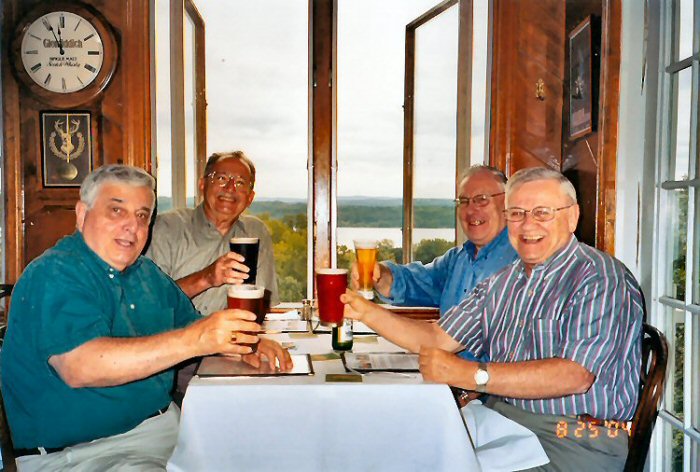 The original membership of the HVBS (Hudson Valley Bullshit Society) with founding member Jack Gahan. This meeting was held at the Raccoon Saloon in Marlboro NY. The Hudson River is in the background. 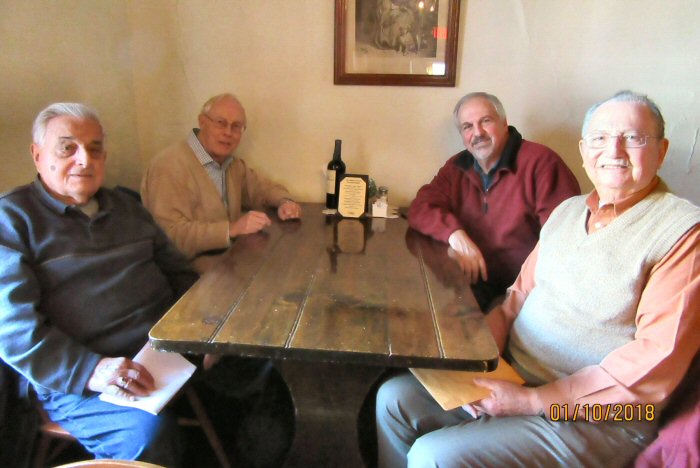 A latter day HVBS meeting at the Hoffman House in Kingston, our regular haunt for over 20 years. In the right rear is Bill Lucarelli, our 'probationary' member. 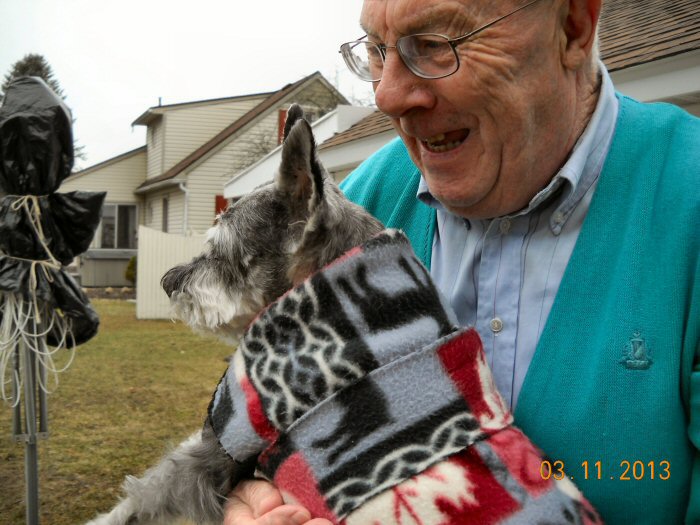 A bundled up Fritzi, out for a romp in the yard. 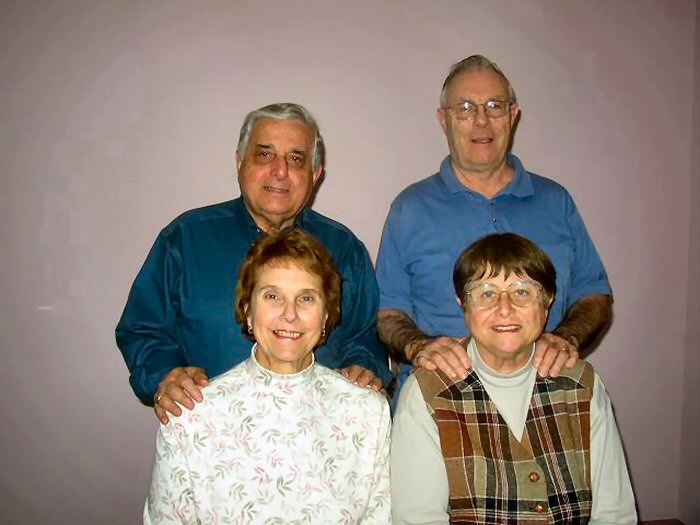 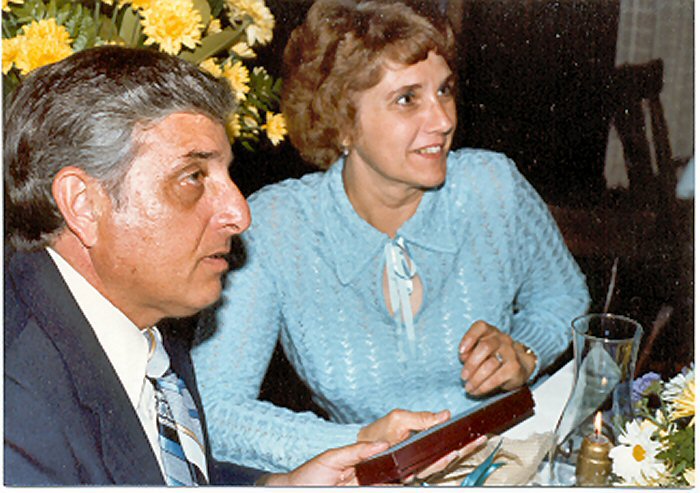 Peter and Kay having lunch with Shirley and Ron in a local Poughkeepsie restaurant. 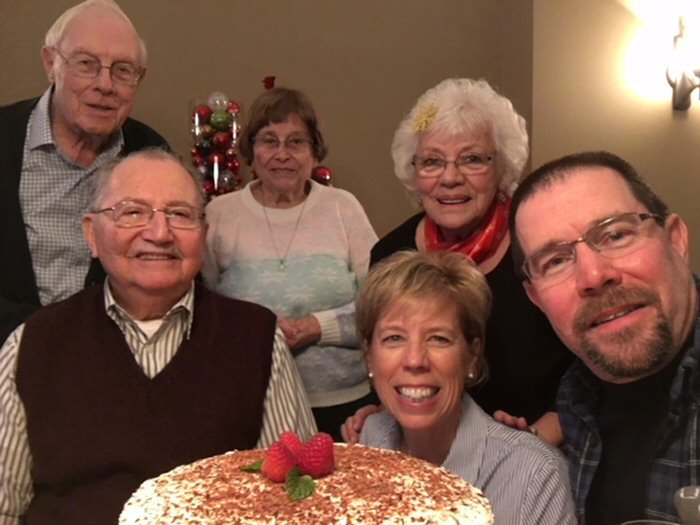 All the family in a "selfie", courtesy of Bobbi's iPhone.